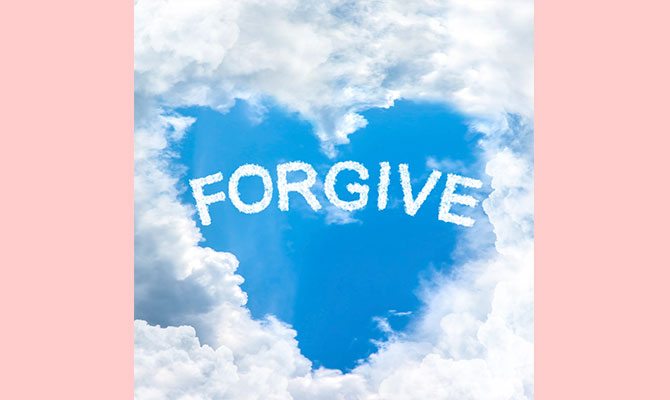 “When we think of a person who creates a lot of sufferings in our own land, usually frustration, anger, hatred come up.  So, here, it’s very useful to make a distinction between action and actor.  Although we totally oppose their actions, their activities, we can keep compassion not to develop hatred towards the person — on that basis to develop forgiveness.” ~Dalai Lama

A few months ago, I had a major scare, which really shook the center of me.  On a routine day, my mother cut off the tip of her fingertip while using the mandolin slicer.   In the midst of administering first aid to stop the bleeding and any potential infection, I witnessed my mother’s hand starting to shake, and, subsequently, her body started falling to the floor.  As I helped her lay down, a tsunami of fear came over me as it looked like she was about to lose consciousness.   Just as I was ready to call the ambulance, my mother regained consciousness (as the blood rushed back to her brain), and I was never so relieved for her stable condition.  The next day, while I went to change her band aid, the same incident occurred, so  I rushed her to the emergency room. My fear deepened even more this time because I thought she may have had a mini stroke or heart attack. Thankfully, again, after examining her, the doctor informed us that the tests did not show those fatal conditions, and I was never more grateful to God and this Universe for this positive outcome.

When I spoke to my sister about the incident, I described it as the most frightening experience of my life.  Witnessing my mother fall into a state of unconsciousness, I felt so helpless, like a little girl about to lose everything she holds dear in her life. I was in shell shock for a week before I started to feel normal again. During this time, I reflected on my deepest fear of losing my mother.  Through this horrifying experience, I felt in my soul that there was an important life lesson that the Universe wanted me to learn, and heard voices in my head that God was warning and placing me on alert, urging me to forgive my mother for any feelings of resentment I may still be harboring before she passes on — the dreadful day when it would be too late.

While there are many people we can and should forgive in our lives, the hardest people to forgive are the ones we love the most. When the bond is so close, all of our emotions — resentment, hate, anger or love — become intensified, so it always becomes harder to forgive.  Deep emotions create confusion within ourselves, so we place a wall up and make it harder to tap into our own genuine feelings of hurt, which makes the process of forgiveness more difficult.

Even though, for many years, I have been dealing with negative feelings toward both my parents (even my father who has passed on), I know in my subconscious there is a residue of resentment.  There is always a part of me that blames my parents for any issues of self worth or insecurities about myself, and I have been a work-in-progress for many years. As products of a very conservative Asian generation and culture, my parents never expressed love in the conventional ways that we believe parents should show their children.  While my parents only raised us in the best way they knew how, as a child, I only interpreted their “cold” love as a reflection of some inadequacy in me, so I carried this negative projection of myself through my adult life.

Spirituality has given me the tools to become aware of my own self worth issues, but it takes so many years of practice to believe this in our subconscious level.  To get rid of any and all feelings of resentment toward my parents, I know that the healing must take place in my subconscious level, so I have done such therapy as NLP (neuro linguistic programming) — a technique that many therapists use (including Tony Robbins) to fix the deeper subconscious levels of our mind.

Through such therapy, we can have awareness of these feelings within ourselves, which then brings us to a place where we can start to objectively see ourselves and the people around us. Through awareness, as Dalai Lama said, when we make a distinction between the actor and the action, we know that the person is still a human being, even though their actions can be heinous.  The common denominator that we all share as sentient beings makes us understand that our bad actions come from a place of ignorance created by ego’s fear.  As my parents only knew how to raise their children through their own cultural upbringing, they thought they behaved as good parents.  From this perspective, I agree that they were good parents, as I can place myself in their shoes, realizing that if I were raised and brought up in their environment, I would most likely behave in the same way.  A classic behavioral pattern we find is when a parent abuses his/her own child, most likely the parent was abused by his/her own parent. By understanding this, we can approach the therapy in a way that can help the abuser, rather than make the abuser more violent by merely placing a callous judgement, and now the possibility of forgiveness becomes viable.

The greatest test of forgiveness comes when we are placed in the most difficult situations, and the golden gate of entrance is whether we are going to pass the test. When China took control over Tibet, the Dalai Lama, along with his followers, was forced to exile and take refuge in India.  His Holiness does not hold hatred or resentment towards China and his ability to forgive makes him more powerful.  The greater the perpetuated crime, the greater our strength of forgiveness is tested and revealed.  Our inner strength and power come to light when we can forgive no matter the level of hurt, so forgiveness is not a sign of weakness, but only strength.

It is so important to forgive because, at the end of the day, when you forgive others, you are really forgiving yourself, healing your own emotional scars. Louise Hay, in her power thought 101 app, says, “forgiveness of myself and others releases me of the past.  Forgiveness is the answer to almost any problem.  Forgiveness is a gift to myself. I forgive and I set myself free.“  Because we are all universally one and the same in our essence, we know that when we heal others, we are really healing ourselves, so forgiveness of others is the path to forgiving ourselves.

I know that the fruition of my own self healing will only happen when I can fully and unconditionally forgive my parents.  Forgiveness is a process, so it’s not about trying to forgive everyone in your life in one day.  It is about making baby steps, so if we can forgive the person who cuts us off on the highway first, then we can next forgive the co-worker who spoke badly about us, and then we can start to forgive the closest and dearest people in our lives.  So just as you are making an effort of forgiving others, give forgiveness to yourself first, which will then open the door to forgiveness of others.  Taking baby steps is the best way to approach forgiveness.

As I pray to have genuine forgiveness for my parents in my heart and soul, I know my mother’s love for me is unconditional, and just by knowing this, I have the best reason for forgiveness.  As our own peace and happiness are dependent on forgiveness, let’s do a little meditation or prayer every day on forgiveness because when we make the first step in forgiving one person, especially to ourselves, we are making a giant leap of forgiveness for all of mankind — and that’s a powerful energy that will change our world for the better.