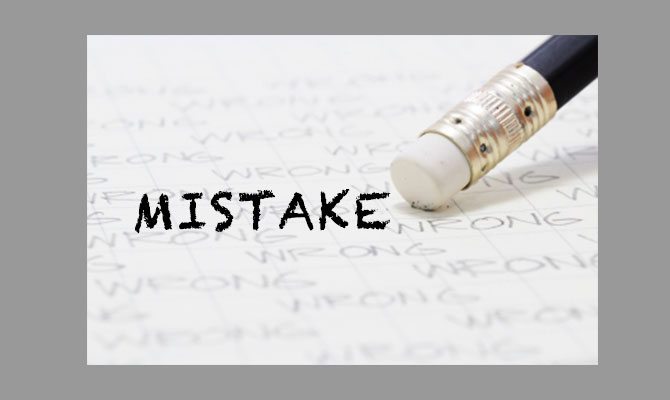 “If you make a mistake and do not correct it, this is called a mistake.” ~Confucius

Having worked in the independent film industry for a number of years, at one point in my life, I took a 2 year hiatus to work in real estate.  I made a drastic change because I thought making money to gain financial freedom would bring happiness.  Even though in those 2 years I made more money than I ever did in the film industry, I regretted making that career shift.   My heart and soul were yearning to be creative and tell stories, so I returned to the film business, feeling, upon my return, that I wasted 2 years.  While I realized that working in real estate was clearly a mistake, my soul learned a very important lesson that money does not bring true happiness.

Needless to say, as humans, we all make mistakes — some small, some large.  As I became a little wiser and placed my life’s path on my true purpose and calling, I realized that my choice was not a mistake because I learned a valuable lesson.  While real estate never brought any intrinsic meaning to my life, as I’m sure I would have burned out sooner than later, it taught me that I should always follow my heart and soul.  For me, telling and sharing stories about life with my fellow humans is where I feel at home.

As Confucius says, a mistake is never a mistake as long as you learn from them. Mistakes are part of our journey to fulfill what spiritual author Caroline Myss calls our “sacred contract” — the contract that we have with our souls to fulfill our purpose and our divine essence.    The two year hiatus made me see what my soul really wants to do, which placed me back on track.

Sometimes we question and second guess our decisions — whether it was a mistake or not.  When our vision is foggy, it means that our minds are just speaking louder than our souls, so we must quiet the mind to let the heart speak.   Regret, in which you look back and think you made a mistake, is the hardest feeling to live with.  I met a successful CEO who clearly thought he had found his soulmate, but made the mistake of passing the opportunity to be with her.   He met her in his 20’s, and, in his 40’s, he was still thinking about her.  I told him that someone in her 20’s may not be the same person in her 40’s, so the CEO can not know for sure whether she was his soul mate or whether he was just projecting a picture perfect image of her in his mind.  Regardless of whether she was his ideal match, the point is that he was dwelling in what he thought was a past mistake, which does not allow him to move forward.  He refused to get over her, so every woman he met could never measure up, so naturally he would be stuck as the eternal bachelor.  By letting her go, he would be able to open himself up to new and exciting opportunities to meet other fabulous women.  To regret and continue to live in the past is a mistake because there is no possibility of a future. As the CEO showed, living in your past mistake is surely a mistake.

Just as dwelling in a mistake is a mistake, it is important to admit and owe up to our mistakes.   Sometimes when our mistakes are too large, to protect ourselves from the pain of looking at ourselves in the mirror, we deny the mistake.  By deflecting responsibility, we can’t learn the valuable lesson intended to improve our lives, so we continue to make the same mistake over and over again, only leading to negative consequences.  By admitting to a mistake, we are fulfilling our sacred contract to be honest with ourselves.   Self honesty, above all else, shows self respect and self worth.  Self worth is priceless because you will say “no” to wrong people and opportunities and “yes” to the right ones.

The wounds and pain of self honesty can be healed with self forgiveness.  In forgiving yourself, you are taking the first step in the healing process.   Forgiveness then allows you to become a third party witness to your mistake.  Like a fly on the wall, you can objectively look at the situation to come to a sound resolution on how to rectify it.  There’s always a solution to a problem, but the answers can come in an objective state.  If you are too caught up emotionally and mentally in the situation, it’s hard to see where the situation went wrong and how to fix it.

Part of forgiving yourself is to know that you will not always be perfect.  The perfectionist in you should know that you are already perfect in your imperfections.  Obsessive need to control hinders your ability to give yourself the freedom to explore who you are in order to reach your divine essence.   Your imperfections make you uniquely special, and when you can accept that, you are also fulfilling your sacred contract.  I knew a perfectionist who became obsessed with all the details of starting a business, so she never launched it because she became overwhelmed with the fear of failure.  While she had all of the experience and resources to be able to pull it off, she couldn’t get pass her fear.

Fear, which is often our default emotion, can breed more mistakes.  Fear of making a mistake can hinder our ability to make sound decisions, so this emotion can back fire on us.  While fear is a necessary emotion to protect us from dangerous situations, don’t let it control your fear of making a mistake.  When this feeling becomes overwhelming, it prevents you from living and taking healthy risks that can alter the course of your life in ways you never thought imaginable.  Fear is a paralyzing emotion and feeds on itself, which creates a vicious cycle of mistakes.

Often mistakes are just blessings in disguises, and when you learn from them, rather then becoming mistakes, they become our best teachers and friends.  Mistakes are wonderful ways God and Universe help us to steer and guide our lives in the right direction.  And when we learn from our mistakes, we will always return to the right path to fulfill and honor our sacred contract — the holy grail to our happiness.