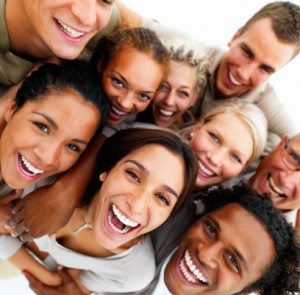 Looking for a healthy pick-me-up? “Laughter Yoga” is a relatively new concept that still emphasizes breathing like traditional yoga, but encourages laughter as exercise for the belly, diaphragm, lungs, and perhaps most importantly, the mind. Laughing Yoga proves true the old maxim – laughter really is the best medicine! As simple and profound as traditional yoga breathing, laughing yoga helps the practitioner feel happy and healthy. Laughing yoga encourages healthy breathing, but its benefits reach far beyond the lungs. Laughing yoga practitioners profess general health improvements such as lower frequencies of respiratory infections like colds and the flu, but they also claim to experience a genuine mood-lifting effect. It’s truly incredible how just a bit of laughter can improve your whole day!

Originally launched by a physician in Mumbai, India in 1995, laughing yoga is based upon the scientific principle that the human body cannot differentiate between “fake” laughter and “real” laughter, so no matter how you slice it, the body will reap the same physiological and psychological benefits. Whether “real” or “fake,” laughter lowers the levels of stress hormones in the blood stream. Laughing fosters hormone levels that literally “put us in a good mood.” Many laughter yoga devotees claim to have used these exercises to overcome depression, or at least to laugh away troubles after a long, stressful day.

A session of laughing yoga requires you to leave your shyness at the door, but if you have trouble doing so, your “laughter leader” will help you shed your inhibitions. Exercise warm ups include lots of clapping, eye-contact with your fellow practitioners, rhythm and movement, and simple chants to promote heavy exhalations from the belly, invoking classic yoga diaphragmatic breathing. Most of all, warm-up exercises are designed to ease the class into a silly mood. Before you know it, you’ll find yourself laughing. Sometimes your laughter leader will lead you through “gibberish” exercises, encouraging everyone to babble like babies. Sound silly? Of course it does! That’s what makes it so effective at promoting laughter and feelings of child-like playfulness.

As a modern adaptation of an ancient practice, Laughing Yoga not only often incorporates traditional yoga postures, but also method-acting techniques to shift your mindset and stimulate the imagination. Your leader may intersperse bouts of laughter with light physical exercise. Whatever approach or method your laughter leader uses, laughing yoga is designed to invigorate, energize and entertain.

As the laughing subsides, your leader will take you through laughing meditation, then finally relaxation and grounding exercises. As opposed to warming up, laughing meditation takes place seated with eyes closed, and laughter starts deliberately and gradually. This can often be a cathartic experience and may bring up other emotions as well. Once the group has settled, as in most forms of traditional yoga, the leader will guide you through “yogic sleeping” in order to bring your energy levels back down to normal, leaving you feeling both relaxed and re-energized.

To find a laughing leader in your own neck of the woods, check out the extensive list on Laughter Yoga of certified instructors all around the world. Or, you can conduct your own Internet search to find laughing yoga classes or clubs in your hometown.

Inner Spirit of Laughter- 5 Secrets from The Laughing Guru