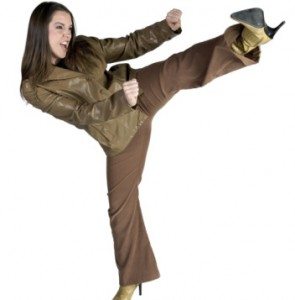 When you think of “Kung Fu,” maybe a ton of Jackie Chan movies come to mind, but Kung Fu is nevertheless a real Chinese Martial art. Also known as “gung fu,” Kung Fu is a term not used to refer to a single form of martial arts. Instead, it refers to literally a hundred different kinds of Kung Fu styles– including Long Fist, Eagle Claw, and Taiji Quan. Kung Fu was originally taught by Buddhist Monks, and was an elite art form practiced by scholars as well as leaders of the government. It only became open to the masses when foreign invaders became a frequent threat, and the masses had to learn how to protect themselves. Similarly, today it is used by all kinds of people to achieve both a fit mind and body. With so many different types of Kung Fu to explore, you will be sure to find a way to master it on your own terms. Kung Fu includes four techniques: striking, kicking, grappling, throwing, and grabbing and kicking joints. Choosing Kung Fu has its advantages because all other forms of martial arts specialize in only one of these techniques.

One of the reasons why kung fu is so effective is because it is based on sharp observations of the human skeletal and muscular anatomy as well as physiology. Based on animal fighting movements, who knows what beast you might unleash? In addition to providing self-defense tactics, Kung Fu offers you better overall health. Some of the general benefits include: better flexibility, posture, blood circulation, and noticeably more strength. People who practice Kung Fu are noticeably set apart by their overall energy and vitality. This enables them to be able to both physically, and mentally withstand demanding pressure. This can be especially fruitful coping tool to those in stressful office environments. Another unique about aspect of Kung Fu is that is great for all ages. Though most other forms of physical exercise tends to get more difficult when one grows older, Kung Fu becomes more accessible and beneficial.

In addition to being a physical discipline, Kung Fu also has a very spiritual component to it. After all, Kung Fu was originally practiced, and taught by Buddhist monks. Originally, Kung Fu fostered the development of respect, patience, humility, and morality. In order to even progress physically in Kung Fu, one must still progress in this character building process. This is particularly beneficial for teens and kids alike who will carry this discipline, and sense of self-respect all the way into adulthood. As this spiritual process is easily transferrable to every day life, it will enable you look at both yourself, and the world in a whole new way.

In addition to contacting your local martial arts academy, you should also search the web for Kung Fu videos. By checking out videos, like by Wing Lam, you can learn a lot before ever even stepping into a class.