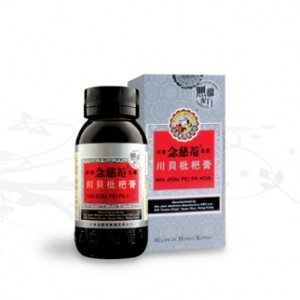 If you are trying to fight that persistent cold or  flu, there’s good news! You don’t have to force yourself to sip bitter tasting cough medicine. Try Nin Jiom Pei Pa Koa, a traditional 100% natural herbal cough syrup with a delightful honey loquat taste.

This famous and highly popular cough syrup cures coughs, cold and flu symptoms and sore throat. Not only does it eliminate phlegm and sooth sore throats, it also nourishes the lung and reduces fever. It has a sweet fruity flavor that leaves a cool refreshing feeling in the throat.

Pei Pa Koa, translated as Loquat Syrup, has been around since the Qing Dynasty. Doctor Ip Tin-See, a famous Chinese physician, originally created the syrup formula. He gave the formula to Yang Xiaolan, a provincial commander, who sought a cure for his mother’s persistent coughing and serious lung condition. The loquat cough syrup cured her illness and the mother insisted that Yang Xiaolan produce the medicine for others.

The natural herbal cough syrup has been around for years and research shows that it actually does work. The Chinese Academy of Traditional Chinese Medicine published a research article in 1994 showing the effectiveness of Pei Pa Koa on relieving coughs, eliminating mucus and relieving asthma. And research in the Journal of Natural Products found the ingredients in the cough syrup to have anti-viral properties effective enough to ward off colds.

The key Chinese herbal ingredients that help support the immune system and reduce cough and cold symptoms include fritillary bulb, ladybell root, peppermint, loquat leaf, pomelo peel, Chinese bellflower root, honey, ginger and many more. The loquat herb in Pei Pa Koa attacks sore throat infections and the honey extract is used for soothing the throat. There are no chemicals, artificial flavors or alcohol. It permanently cures coughs, unlike most cough medicines that are just cough suppressants.

Nin Jiom Pei Pa Koa is available at your local Asian supermarket or get it here: