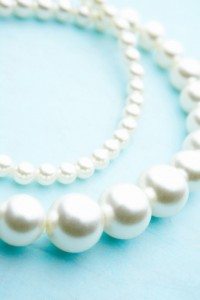 Ancient and long-practiced Chinese medicinal treatments are still as popular and relevant as they were thousands of years ago. Pearl powder, one such treatment, has long been hailed by the Chinese as an anti-inflammatory and detoxification agent, especially helpful for sensitive or aging skin.

Cosmetically, pearl powder has been in use since Tang Dynasty, when the performers first began using the powder for stage make up, but the Chinese have further found that the high content of amino acids, minerals and antioxidants in freshwater pearls, can, once grounded into a fine powder, give revitalizing effects to the skin. Pearls’ amino acids – the essential building blocks of collagen – and minerals enhance the skin’s renewal process, as well as boost the skin’s radiance and softness through micro-exfoliation. Practitioners of Chinese medicine also believe pearl powder can help fight pigmentation and discoloration of the skin by slowing the skin’s production of melanin (which controls the color of our skin), and also by mitigating sun damage. Pearl powder also helps maintain youthful skin by reducing pore size and maintaining natural elasticity.

Chinese history shows a long-held belief in the power of pearl powder. During China’s Qing dynasty, the renowned Manchurian Empress Dowager Cixi was known to use pearl powder to stave off many afflictions, and considered it a key ingredient to her many reputed “secret beauty recipes.” The Empress, like many other Chinese, took pearl powder internally as well as applied it externally. By mixing the powder into a tea, this medicine can boost calcium absorption, soothe the liver, treat a sore throat, adjust the nerve system, regulate metabolism, improve eyesight, treat insomnia, energize the body, and relieve stress – to name but a few believed benefits. Between the Taiping and Boxer rebellions, the deterioration of the Qing dynasty, and constant assassination attempts plotted against her, Cixi knew better than anyone the need for the pearl powder’s nourishment. Even after she died, she ordered that a pearl be placed in her mouth when she was buried to help preserve her body – the ultimate testament to her belief in the pearl’s anti-aging effects. So, pearl powders beauty and healing remedies have been long practiced for thousands of years.

Get your own pearl powder here: Pearl Powder Remove Spots and Acnes Whitening and Detoxifying 200g